With the publication of the final volume of the Sojourners Cycle, The Sojourner, the rest of the series is on sale until October 25:

David Aeida, sub-Regent of the Church of Regents, cannot remember anything about who he is. But he finds himself in the middle of a vicious conflict between the Church and a guild, the Society of Travelers that patrols the crossings in the multiverse. Both will stop at nothing to gain whatever knowledge he possesses. Most dangerous of all, is the implacable hunter, known only as the Seeker, who has his own reasons for wanting to find Aeida.

Born out of the chaos that followed the arrival of the Society of Travelers in its universe, the Church of Regents has as its sacred mission to find the one true universe, of which all others are but reflections. However, the Society has outlawed anyone from crossing among the universes, and will do anything in its power to stop the Church from following its mission.

Laila Johar has been at the center of that conflict for years, divided in her loyalties. One of the chosen of the Church’s founder De Gofroy and wife of the current Grand Regent Molijc, she also might be working with the Society of Travelers to destroy the faith. For betrayal and lies are at the heart of both the Church and the Society, forever locking them in a dance of desire and guilty, love and revenge, rage and despair, with consequences for all the universes.

The Sojourner is available now to now 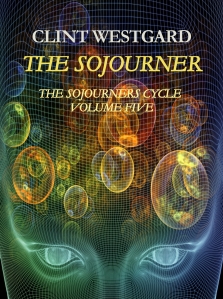