In advance of the publication of The Double on May 3, here is a short excerpt:

The Grand Regent sits upon his throne, surveying the audience room atop De Gofroy’s tower. I stand at his side, as expressionless as I can manage, though I am suppressing a grin of delight. At long last, I have returned to my rightful place. A sub-Regent of the Watchers’ Order. A servant to the Grand Regent. A shield against all those who would stand against the faith.

The Grand Regent studies those gathered before him, casting his eyes from one face to the next, as though seeking to penetrate whatever walls they have built up to keep their secrets from the faith. That is against the Protocols, as we all know. What his gaze tells them is that he will see them revealed. And my presence says that, if he is unable to, the Order shall do the work for him.

Everyone here knows what that means, some of us only too well. I see Morris Loverne, that traitor, now rendered compliant, standing alert and stiff at the back of the audience chamber, ready to act should the need arise. It will not. His remaining loyalists within the Church have been arrested and subjected to the Acolyte’s ministrations. The rest are scattered to the winds. But with what he has already revealed and what I know, we shall find the rest soon enough. Laila Johar, the companion of my mind and enemy of the faith, has been overthrown and banished. I rule this flesh now. She is but a distant voice I barely hear. I have choked the life from her.

It still feels strange to stand here in my own body, to have it respond to my thoughts, to think what I wish to think, and to act as I see fit. I want to luxuriate in the glorious sensation of it all. To be me again, to be truly me. There are the memories the Acolytes stole from me, but that is a nuisance, nothing more. They can be restored, surely, and Laila removed from within me. I will ask the Grand Regent when the time is right.

For now I watch him, savoring my moment of triumph. Our triumph. At length, he stands and begins to speak.

“I am here to welcome back a faithful vessel to the Church and the Watchers’ Order. David Aeida.” He pauses to turn to me, and I bow to him. An ironic smile crosses his lips. “David Aeida has been a faithful vessel. More than any of you will ever know. Perhaps more than even he himself is aware.

“He has returned to us after some time abroad.” Here he offers a small gesture with his fingers and another ironic smile. “Much has changed since he left and he has learned much about our enemies, as he has told me a little. I will learn more from him in the coming days, I am sure, for David has much to share.”

He rewards me with a warm smile. I am unable to stop myself from beaming. Looking out over the assembled, I am met by blank, unwavering stares. The grim, expressionless visages of those gathered unsettles me. How many here have been brought before the Acolytes to be returned to the ranks of the faithful? Morris Loverne for one. Myself for another.

I scan the faces, looking for anyone familiar. There are a few of the loyalist High Regents—at least they were High Regents when I was last involved in the Order—and surely they would be left untouched by the Acolytes, or else they would have been removed from their positions. The Grand Regent cannot keep those he does not trust so near and in such influential positions in the Hierarchy. Their unchanging stares and similar expressions all leave me with a sense of deep disquiet.

The Grand Regent pauses, considering his next words. “The last years have been difficult for the faith. De Gofroy’s vision was almost vanquished. I have fought to ensure that the quest for the one true universe can continue, and now I feel we are closer than ever to achieving it. Many have fallen in the pursuit of that quest, and we should remember them now.”

He looks to the ceiling solemnly, intoning a brief prayer, his words so quiet that I cannot make them out. When he is finished, he turns back to the assembled. “And make no mistake, we must stay on our guard. The Order has done wonderful work in rooting out the Society agents in our midst, to say nothing of the apostates who would pervert De Gofroy’s words. We are so near to triumphing over them both. I can feel it in my soul.

“David Aeida is central to that effort,” he says, as if suddenly recalling that I am present, standing beside him. “There will be difficult days that lie ahead, for all of us. But now we are on the path to reuniting our fragmented beings with our true selves—to be Regents no more—I feel certain these sacrifices will all be worth it. We shall save not only ourselves, but billions across untold universes. Never forget that what we do, all we sacrifice, is for them.”

The Grand Regent nods, a dismissal of sorts. Those assembled bow as one being and shuffle out the door under the watchful gaze of Morris Loverne, who resumes his post outside the audience chamber door. The Grand Regent turns to me, the ironic smile returning to his face.

The Double is now available for preorder:
Buy the ebook 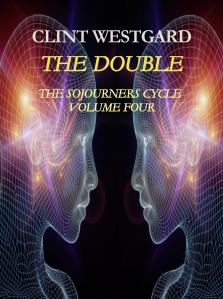