In advance of the publication of The Apostate on April 27, here is a short excerpt:

The address, I saw when I arrived, was for a strip mall set off a busy street. There was laundromat, a barbershop, a pizza place, and a Chinese food place advertising its homemade jerky. There was another shop on the far corner with a faded sign and awning where it was not immediately obvious what was on offer within. A front of some sort, I thought. There was a payphone on the street corner—no phone box, just a pole bent at an odd angle with a phone attached—and a wide-eyed man was carrying on a loud and scattered conversation. “I just need twenty bucks man. That’s all,” I heard him say, and felt a familiar itch begin to work inside me.

I turned away, before it had a chance to grow more insistent, and went to find the entrance to the offices above the shops. It was around the side from the mystery store, and I went up the stairs, noting the well-worn carpet. At the top of the stairs there was a directory, which I scanned until I found what I was looking for: 214 Regency Services Limited. I followed the arrows down one of the hallways past closed doors to offices, disconcerted by the silence emanating from the hall. Was there anyone in any of these? I began to feel quite certain that this whole enterprise was a mistake, a waste of a precious free afternoon that I could have spent doing something else. I thought again of the man on the phone below and the itch returned. That was enough to push me on toward the office.

I knocked on the door and several painful seconds passed without any indication that there was someone within, during which I told myself again and again that I should turn and go. The door opened, revealing a young man about my age with a welcoming smile and shaggy mop of hair. “Welcome, Laila,” he said. “I’m so glad you decided to come.”

I could only muster a nervous smile in return as he ushered me inside. He continued to chatter away, trying to set me at ease, but I did not listen to what he was saying, my doubts about coming here returning sharply again. This was a mistake. My roommate had been correct. It was a cult and I was just one of the susceptible fools being drawn in. I was led into a large conference room overlooking the parking lot below, and the congenial Regent, as they referred to themselves, told me to make myself comfortable and that he would return in a moment.

There were three chairs in the room, looking oddly out of place in the rest of that empty space. I sat in the one facing the other two, understanding what was expected of me. A few minutes passed and I tried not to fidget or think about the man on the phone below or why I was here at all. Just as I was preparing to stand up and leave, the door opened and the man who had welcomed me entered, still smiling, followed by an equally gregarious woman. Both of them were dressed in bland white and black clothing, as though they were administrators in some office. I half expected them to launch into a discussion on supply chain or risk management.

The woman gave me a generous smile. She had long, tightly coiled hair that she had pulled back behind her head, and it danced behind her as she spoke. “My name is Opal, and this is Hector. Thank you so much for coming today. We have so much to tell you about our faith. But first, what brought you to us?”

I squirmed in discomfort under their gleaming eyes. “I read some of Mayan Codexes and The True Nature of the Multiverse.”

“It is De Gofroy’s finest work, in my opinion,” Hector said with an encouraging nod.

“It was interesting. I…I guess I wanted to find out more.” The room seemed uncomfortably warm, though the windows were tinted to stop too much light from coming in.

“Of course,” Opal said. “We are happy to answer any questions you might have. First we’d like to find out a little more about you. You know how we do that?”

“What we will do today is not the Protocols,” Opal said. “That only takes place at our Protocol Centers. For our initial meeting, we do what is called a pre-script.”

“It’s something De Gofroy developed,” Hector said. “The Protocols are too difficult for most new initiates to go through. It’s overwhelming. The pre-script helps to open your mind to the Protocols. Helps prepare for the changes you will undergo. I will not lie to you—the Protocols of the faith are difficult. Not everyone is able to endure them. The pre-script will tell you if you have what is required.”

“I thought this was all supposed to help me,” I said. My throat felt dry, and I wanted to ask for a glass of water.

“Oh, it does,” Opal said with the certainty of a true believer. “I cannot begin to tell you how. You’ll have to experience it yourself.”

Hector nodded firmly. “I was lost, completely adrift with my life. The understanding that I have gained from De Gofroy’s teachings and the Protocols has completely reshaped me. I understand my place in the universes now and I know what must be done and the part I will play. You will be a magnificent vessel.”

I looked from face to face, their eyes shining with belief, in a way that made me feel uncomfortable. I wanted that certainty. I wanted the vague sense of emptiness and unease that had haunted me for so long to dissipate. Yet everyone said the Regents were mad, a cult, with no greater understanding of the universe than any other religion. All of it lies. There was something about De Gofroy’s book that had struck a chord in me, though, about our infinite selves. I felt that, and I wanted to understand more.

“Shall we begin?” Opal said.

The Apostate is now available for preorder:
Buy the ebook 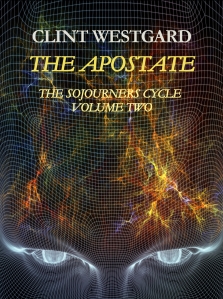